The Alfa Romeo 158/159, also known as the Alfetta (Little Alfa in Italian), is one of the most successful racing cars ever produced. The 158 and its derivative, the 159, took 47 wins from 54 Grands Prix entered. It was originally developed for the pre-World War II voiturette formula (1937) and has a 1.5 litre straight-8 supercharged engine. Following World War II, the car was eligible for the new Formula One introduced in 1947. In the hands of drivers such as Nino Farina, Juan-Manuel Fangio and Luigi Fagioli, it dominated the first two seasons of the World Championship of Drivers.

The first version of this successful racing car, the 158, was made during 1937/1938. The main responsibility for engineering was given to Gioacchino Colombo.

The car's name refers to its 1.5 litre engine and eight cylinders. The voiturette class was for racing cars with 1.5 litre engines, standing in the same relation to the top 'Grand Prix' formula (usually for 3 litre engines) as the GP2 series does to Formula One today. Alfa's 3 litre racing cars in 1938 and 1939 were the Tipo 308, 312 and 316.

In 1947, the Alfetta was put back into service. The new rules allowed 1500 cc supercharged and 4500 cc naturally aspirated engines. The 158 was modified again, this time to produce over 300 bhp (220 kW) and was denoted as Tipo 158/47. The car made a tragic debut in the 1948 Swiss Grand Prix where Achille Varzi lost control of his car and was killed. Another loss for the team came in practice for the 1949 Buenos Aires Grand Prix, where Jean-Pierre Wimille was killed in an accident (driving with Simca-Gordini).

In 1950, the 158 was eligible for the new Formula One European Championship. The car won every race in which it competed during that first season of Formula One; it was incredible that a car which had originated in 1938 was so victorious, most likely because all the other constructors (as few as there were) had less money to build and develop their cars and the Alfa had so much development time. The Alfa Romeo team included talented drivers such as Giuseppe Farina and Juan Manuel Fangio, the latter of whom later won the World Drivers' Championship five times.

At the end of the 1950 season, a further updated version known as the 159 was produced, which was used for the 1951 season. This version had reworked rear suspension, the old swing axle was replaced with a De-Dion axle and the engine produced around 420 bhp (313 kW) at 9600 rpm. But this amount of power out of a small engine with a big supercharger came at a price- it had horrendous fuel consumption. It did 1 1/2 miles to the gallon- compared to the Talbot-Lagos of the time which did 10 miles to the gallon. The reason for this was because the simplistically designed engine had been virtually unmodified, while bigger superchargers had been added over time. The British Grand Prix at Silverstone was the first Formula One Grand Prix not won by an Alfa primarily because Fangio and Farina both had to stop twice simply to re-fuel their cars- and the Ferrari of José Froilán González did better on fuel and would go on to win the race, with Fangio second. Still, the Alfa had the edge on performance and with wins in Switzerland, France and Spain, Fangio won his first of five championships that year. For their second-to-last World Championship race (until 1979), the Italian Grand Prix at Monza, Alfa Romeo introduced a new evolution version known as the 159M, the "M" standing for Maggiorata ("enlarged").

After an unsuccessful bid by Alfa Romeo to obtain government assistance to meet development costs, the team announced their retirement from Grand Prix racing at the end of 1951. This, combined with problems for other Formula One teams lead to a decree by the FIA that all Grand Prix races counting towards the World Championship of Drivers in 1952 and 1953 would be for cars complying with Formula Two rather than Formula One . 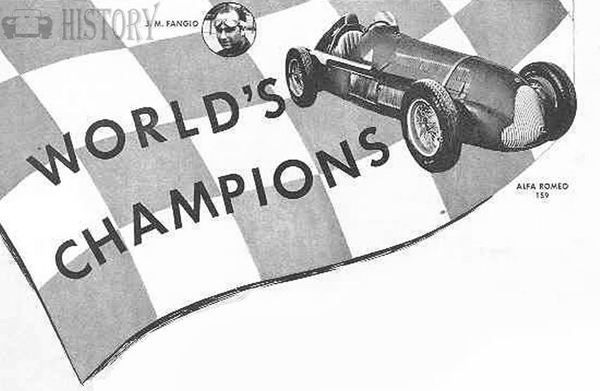