The Alfa Romeo G1 was the first all-new design from Alfa Romeo after the end of the A.L.F.A. brand. Giuseppe Merosi, while into a legal action against Nicola Romeo about the takeover conditions, designed at home the drawings for both the update of the prewar 24HP into the revised 20/30ES and the new luxury G1. Chassis was longer and stiffer than the 40-60 HP of 1914 with the Rolls-Royce market as a target. The Biggest new thing in this car was a new 6.3 L (384 cu in) straight-6 engine, which produced 70 bhp (52 kW) and 216 lb·ft (293 N·m) of torque. The car achieved a top speed of 86 miles per hour (138 km/h). The G1 was used also in motorsport and it won its own class at Coppa del Garda. Petrol prices were rising and it was hard to sell a car with such a big engine, so total production was only 52 copies. At this moment only one copy exists at New Zealand's Alfa Importer, this is also the oldest surviving Alfa Romeo branded car.

The planned follower Alfa Romeo G2, an improved version, was never produced after the commercial failure of the G1, which found virtually no customers in Italy and whose full batch of 50 (the other 2 were prototypes) found their way to Australia. 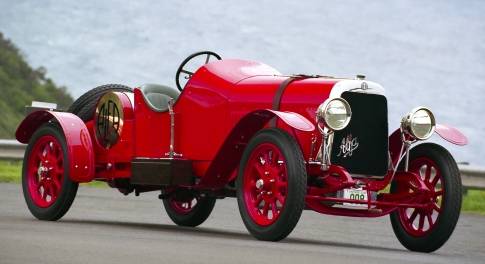