The Alfa Romeo Alfetta (Type 116) is an executive saloon car and fastback coupé produced by the Italian manufacturer Alfa Romeo from 1972 to 1987. It was popular due to its combination of a modest weight with powerful engines, selling over 400,000 units until the end of its production run.

The Sedan had a body designed by Centro Stile Alfa Romeo, and the Alfetta GTV coupé (not to be confused with the more recent 1995 Alfa Romeo GTV, or the classic Giulia GTV), was designed by Giorgetto Giugiaro. The Alfetta introduced a new drivetrain layout to the marque. Clutch and transmission were housed at the rear of the car, together with the differential for a more balanced weight distribution, as used on the Alfetta 158/159 Grand Prix cars. The Gold Cloverleaf (Quadrifoglio Oro) model was actually sold as the Alfetta 159i in some markets. The suspension relied on double wishbones and torsion bars at the front and a de Dion beam at the rear. The Alfetta was renewed in 1979 with a revised frontend, new wheel rims and new lights, as well as a diesel version.

It was available with two four-cylinder DOHC engines with two valves per cylinder and a turbodiesel engine supplied by VM Motori.The 1.6 and 1.8 L base models had two double-barrel carburettors, while the 2.0 DOHC received fuel injection in 1979.

The diesel, Alfa Romeo's first passenger car thus equipped, was initially of 2.0 litres, but was increased to 2.4 L in 1982. The diesel added 100 kg (220 lb) over the front axle, but for some reason it did not originally receive power steering as standard. Nonetheless, respecting Alfa Romeo's sporting heritage, it received a tachometer - very unusual in diesels of this era.The diesels were mostly sold in Italy and in France, as well as a few other continental European markets where the tax structure suited this model.

The Alfa Romeo Alfetta became well known throughout the world since it was Italian Prime Minister Aldo Moro's official escort car, when, in 1978, he was first kidnapped, then killed, by the Italian Terrorist left-wing organization The Red Brigades. A fictionalised account of these events was produced as a critically well regarded Italian film, The Advocate, which also heavily featured Alfettas of all types, from Carabinieri 'Short Nose-Round Light' through to the Prime Minister's own 'Long Nose-Square Light' 2000 Super Saloon.

A special semi experimental version of CEM (Controllo Elettronico del Motore) was developed in 1981 in collaboration with the University of Genoa, it was made 10 examples derived from the "2.0", this engine could use two- or four-cylinder as needed in order to reduce fuel consumption. The cars were assigned to taxi drivers in Milan, to verify operation and performance in real-use situations. After the first trial, in 1983, was produced a small series (991 examples), which were entrusted to a select clients. Despite this second experimental phase, the project had no further developments.

The rear de Dion transaxle found on the Alfetta and derivatives- GTV, 90 and 75- provided these cars with excellent weight distribution. The advantages to handling were noticed in contemporary commentaries by motor testers such as Vicar. The transaxle design, in combination with inboard rear brakes and a well-located de Dion rear suspension, resulted in excellent traction and handling. The front suspension design was also unusual in that it incorporated independent longitudinal torsion bar springs acting directly onto the lower wishbones and with separate dampers.

In 1979, some minor revisions, including a revised engine with new camshaft profiles and a change to mechanical-and-vacuum ignition advance, saw the 2.0-litre redesignated the Alfetta GTV 2000L. Autodelta also produced a limited edition turbocharged model, named Turbodelta, for FIA Group 4 homologation. This version used a KKK turbo which pushed power up to 175 PS (129 kW). The car also received a modified suspension layout. This was the first Italian petrol production car with a turbocharger.

The styling of the GTV, while distinctive, can be seen to share many design features derived from the Montreal supercar, as translated down to a simpler and thus more marketable vehicle. Examples of this are the bonnet line, which while briefer, still has 'scallops' for the headlights, and the tail light clusters which resemble those of the Montreal. The door shape is similar, and in a sharing of parts, both vehicles employ the same door handles.

In 1981, the GTV received a restyling, with grey plastic bumpers and all matte-black trim replacing bright stainless steel, the 1.6-litre and 1.8-litre versions were discontinued and the Alfetta 2000 GTV became the base coupé model as the Alfa GTV 2.0. The Alfetta name was dropped, but the two-litre coupé retained its type designation of 11636 for left-hand drive and 11637 for right-hand drive. 15-inch alloy wheels were now standard, as opposed to the earlier cars' 14-inch pressed steel or optional 14-inch alloy. 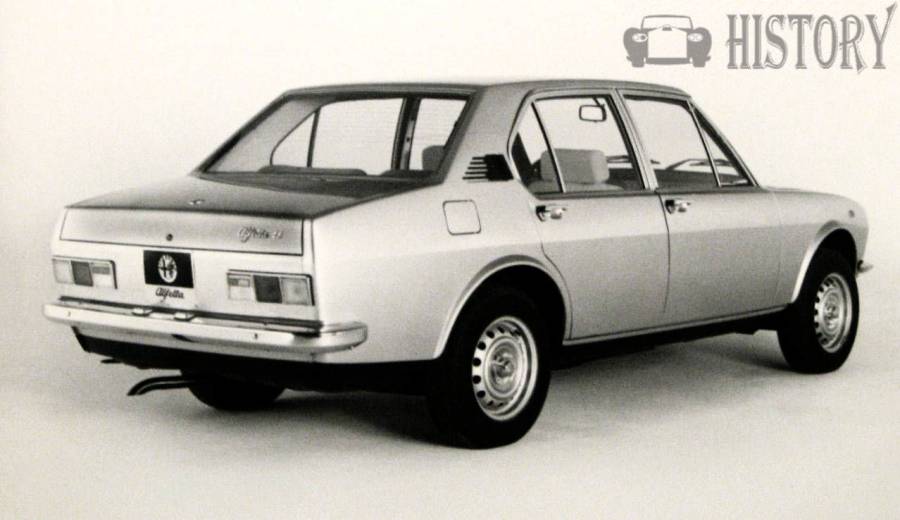