The Alfa Romeo Alfasud (Type 901, 902 and 904) is a compact car manufactured by Industria Napoletana Costruzioni Autoveicoli Alfa Romeo-Alfasud S.p.A of Italy from 1971 to 1989, a new company owned by Alfa Romeo and Finmeccanica. The company was based in the poor southern region of Italy as a part of labor policy of the government.

The car was built at a new factory at Pomigliano d'Arco in southern Italy, hence the car's name, Alfa Sud (Alfa South). It was developed by Austrian Rudolf Hruska.

January 18, 1968, saw the registration at Naples of a new company named "Industria Napoletana Costruzioni Autoveicoli Alfa Romeo-Alfasud S.p.A.". 90% of the share capital was subscribed by Alfa Romeo and 10% by Finmeccanica, at that time the financial arm of the government controlled IRI.Construction work on the company's new plant at nearby Pomigliano d'Arco began in April 1968, on the site of an aircraft engine factory used by Alfa Romeo during the war. Three years later the Alfasud was shown at the Turin Motor Show in 1971 and was immediately praised by journalists for its styling (by Giorgetto Giugiaro of ItalDesign) and handling. It featured a 1,186 cc flat-four engine.

Despite its two-box shape, it did not initially have a hatchback. The first production Alfasuds were four-door sedans, with a sporty two-door TI (Turismo Internazionale, or Touring International) model following at the end of 1973.

In 1974, Alfa Romeo launched a more luxurious model the Alfasud SE. The SE was replaced by the 'L' (Lusso) model in 1975. The Lusso model was produced until 1976, by then it was replaced with the new '5M' model, the first four-door Alfasud with a five-speed gearbox. A three-door station wagon model called the Giardinetta was introduced for the 1975 model year. 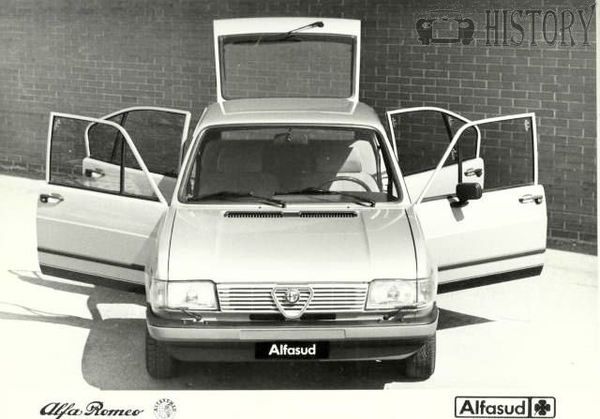 In 1976, the Alfasud Sprint was launched. On the same platform, it was a lower, more angular sports model. The Sprint did feature a hatchback, a more powerful 1,286 cc 75 PS (55 kW) engine and a five-speed gearbox. The engine was later fitted into the standard Alfasuds, creating the 1300 Ti models, and the five-speed gearbox found its way into the basic Alfasud, creating the 5M (5 Marce, five gears) model.

A 1,490 cc engine was soon made available to all body shapes, originally developing 85 PS (63 kW). By the end of the Alfasud's life, there was a tuned version of the engine developing 105 PS (77 kW) in the Quadrifoglio Verde (Green Cloverleaf) model.

Despite sophisticated engineering, Alfasuds (especially the early ones) had a strong reputation for suffering from rust, possibly due to the storage conditions of the bodies at the plant.

All Alfasuds were upgraded in 1980 with plastic bumpers and other revisions. A hatchback was added to the original shape in 1981. The Giardinetta was deleted from most markets around this time. By now, most of its competitors were producing a hatchback of this size, although many of them were producing a saloon alternative.

The Alfasud sedans were replaced by the Alfa Romeo Arna and 33 models in 1983. The 33 was an evolution of the Alfasud's floorpan and running gear, including minor suspension changes and a change from four-wheel disc brakes to rear drum brakes in an effort to reduce costs. The Alfasud Sprint was renamed into Alfa Romeo Sprint in 1983, this model was continued until 1989 by sharing 33's running gear.

The Alfasud was also assembled in Malaysia, by City Motors in Ipoh (although the plant was located in Kuala Lumpur). Malaysian cars received the 1.2, 1.35, and 1.5 liter engines and all had the four-door bodywork In South Africa, meanwhile, Alfa Romeo's local subsidiary built the Alfasud in their plant in Brits. Beginning in June 1981, the Alfasud was renamed the Alfa Romeo Export GTA and received the 105 PS (77 kW) version of the 1.5 liter flat-four. The Export GTA has the five-door bodywork. Australian manufacture of the four-door L model commenced in 1974.The Ti and hatchback models were also produced up to 1984.

From 1975, a one-car racing series for Alfasuds was organised. One year later, the Alfasud trophy began in Italy and Austria, and later France and Germany got their own competitions. In 1977 the "Trofeo Europa Alfasud" was set up, in which the best drivers from each country competed. The Trofeo Alfasud was equipped with the 1,286 cc engine with an Autodelta kit. Gerhard Berger is probably best known driver who participated in the Alfasud Trofeo. An Alfasud also made an appearance at the Bathurst 1000 in the late 1970s/early 1980s.

Concept car based on Alfasud's platform and engine, named Caimano 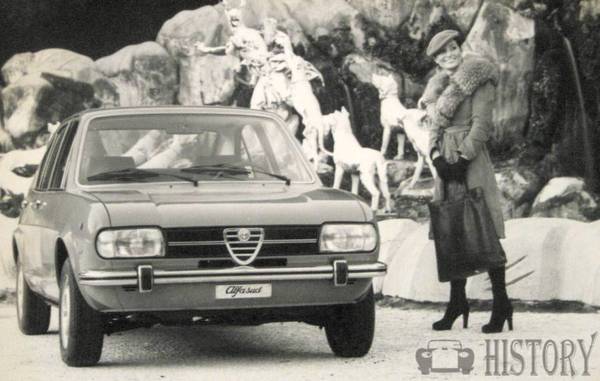