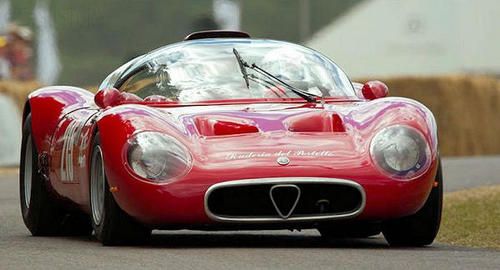 Alfa Romeo started development of the Tipo 33 in the early 1960s, with the first car being built in 1965. It was sent to Autodelta to be completed and for additional changes to be made. It used an Alfa Romeo TZ2 straight-4 engine,but Autodelta produced its 2.0 litre V8 soon after. The 2000 cc (122ci) Tipo 33 mid-engined prototype debuted on 12 March 1967 at the Belgian hillclimbing event at Fléron, with Teodoro Zeccoli winning. The first version was named as “periscope” because it had very characteristic air inlet. It was powered by a 1995 cc (122ci) 90° V8 of 270 hp (201 kW), with a large-diameter tube frame.

The original T33 proved unreliable and uncompetitive in the 1967 World Sportscar Championship season, its best result a 5th at the Nürburgring 1000, co-driven by Zeccoli and Roberto Bussinello.