The Adler 2-litre is a medium sized family car introduced by the Frankfurt based auto-maker, Adler in February 1938, as a replacement for the Adler Trumpf.

Transmission of power to the front wheels was via a four speed manual transmission without synchromesh.  Gear changing used a column mounted lever.

Three standard all-steel bodies were provided in 1938 by Ambi-Budd of Berlin.Customers could choose between a two door “Limousine” (saloon/sedan), a cabriolet with four side windows, or a more sporting cabriolet with only limited space for anyone prepared to sit in the back. The bodies sat on a 2,920 mm (115 in) wheelbase, and had an overall body length of 4,540 mm (179 in). The manufacturer’s recommended price was 4,350 Marks for the sedan/saloon and 4,950 for the less expensive of the two cabriolet bodied cars.

The Adler 2-litre continued in production from 1938 until 1940, by which year 7,470 had been produced, a respectable total when compared to the better remembered BMW 326 of which 4,705 were produced in 1938 and 3,313 in 1939, although since the BMW had been in production since 1936 its total production volume was much greater than that of the Adler 2-litre. 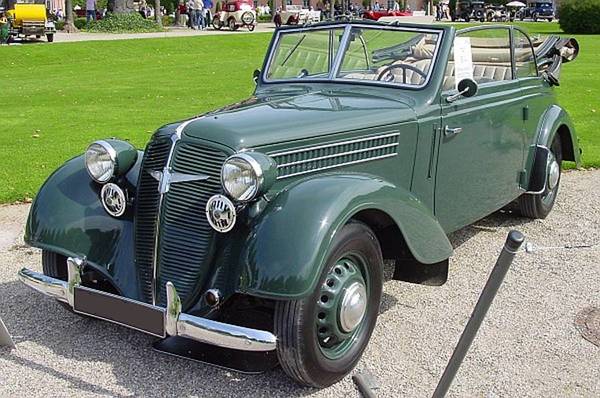