During the 1970s, AC Managing Director, W Derek Hurlock, developed a new and smaller car. Mid-engined designs were in fashion at the time and in 1972 the prototype Diabolo was built with an Austin Maxi engine and transaxle Peter Bohanna and Robin Stables. However, following considerable investment in development using the BLMC power unit and transmission, the engine manufacturers decided that they needed all the E series engines they could make to power their own Maxi and Allegro models, so the Diabolo project appeared likely to collapse for lack of an engine.

In much the same way as they had taken up the Tojeiro prototype and turned it into the Ace, AC acquired the rights and at the 1973 London Motor Show showed their own version, the mid-engined ME3000 with the 3.0-litre Ford Essex V6 engine installed transversely over a custom AC-designed gearbox. The car featured a steel chassis making extensive use of square-section steel tube, with a strong monocoque for the central portion of the body. This framework supported a glass fibre body.

Press releases of the time indicated that the company hoped to be able to build and sell the car at the rate of 10 - 20 cars per week, although it was at this stage apparent that the model was in many ways not yet ready for serial production.

Development was complete in 1976 when new Type Approval regulations were introduced. A prototype failed the 30 mph (48 km/h) crash test, and the chassis had to be redesigned. On the second attempt, the car passed.

The design changes meant the AC 3000 ME was out of date by the time it reached production.The first cars (now renamed 3000ME) were delivered in 1979, by which time they were in direct competition with the Lotus Esprit. The goal of 250 cars per year did not seem possible.

After 71 cars were sold, Hurlock called a halt to production as his health was suffering and the company was struggling during a period of recession. In 1984, production stopped at Thames Ditton and the car and the AC name were licenced to a new company registered as AC (Scotland) plc run by David McDonald in a new factory in Hillington, Glasgow. Here, 30 cars were built, including a development car tested with Alfa Romeo's 2.5-litre V6 engine and a nearly-complete Mark 2 prototype of the same. Regardless (or possibly because) of these developments, AC Scotland called in the receivers in 1985. 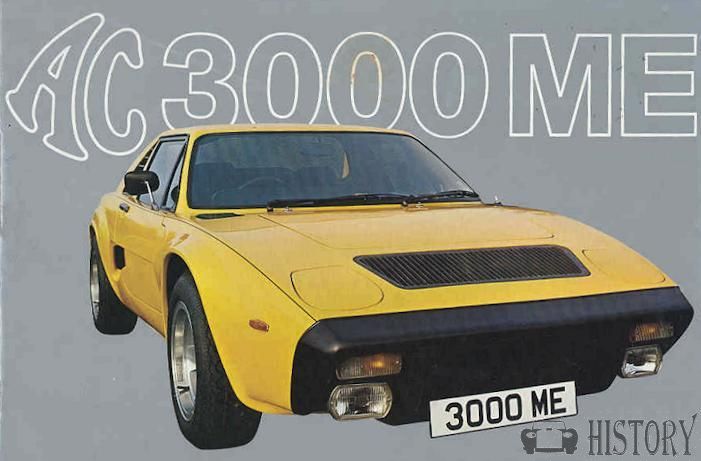