This car is the racing version of the Abarth range and it was developed first by elaborating mass-produced cars. The Abarth 3000 SP SE 013 to SE 022, were also called Abarth 3000 Sport Prototipo, Fiat Abarth 3000 or Abarth 3 litres SP the first Abarth model built according to the new regulations was the SE 013, a two-seater sports prototype without a roof built in 1968 a spider or open two-seater.

The race cars first one-litre, then two-litre cars but always straight fours. Then in 1966, a V8 engine. The engine was based on a 2-litre V8 introduced in 1966 then 2.5 and then the cylinders had been bored out to a displacement of 3 litres. This eight-cylinder with two valves per cylinder and four Weber twin carburettors delivered 350 hp (257 kW) at 8200 rpm. The engine is installed behind the driver in the centre of the vehicle in front of a five-speed gearbox. The shift lever to the right of the driver. The water radiator mounted high above the engine, while the oil radiator is at the sides of the engine.

The car was homologated and entered for the 1968 24 Hours of Le Mans, but was withdrawn after the race was moved from the original date of June to the autumn due to the strikes caused by the protests of student unrest in 1968. The debut of the Abarth 3000 SP it took place in October 1968 at the airfield races “Preis von Wien” in Aspern and “Preis von Tirol” in Innsbruck, with Peter Schetty winning both races.

In 1969 at the 500 km of Imola, Abarth fielded two 3000s with two different bodies called SE 015 and SE 016. In October 1969 Arturo Merzario and Johannes Ortner took second and third place in the general classification at the "Preis von Tirol" and Merzario obtained the class victory in the over two-litre category. Toine Hezemans later won the "International AvD Circuit Race" at Zolder.. At the Imola 500 km race, Abarth entered two 3000 with different bodies, designated SE 015 and SE 016. In practice, both cars were fast and only inferior to Jackie Ickx 's Mirage, but Johannes Ortner was unable to race after a defect and Merzario retired after 16 laps. In October 1969, Merzario and Ortner took second and third place overall in the “Prize of Tyrol”, and Merzario won the class for racing cars with displacements of more than two litres. Toine Hezemans won the “International AvD Circuit Race” in Zolder with a weak fieldon an Abarth 3000 SP, Ortner was third.

In May 1970, Abarth entered the 3-litre car for the first time in a round of the manufacturers' world championship, the Targa Florio. However, Mario Casoni had an accident in practice, so that only one car started the race, and the Merzario/Ortner team retired after just two laps with gearbox damage.

For 1971, the Abarth 3000 was further developed. The tubular frame became narrower, the body smoother. Most of the changes affected the engine. It received two camshafts per cylinder bank, Lucas fuel injection instead of carburettors and the "Dinoplex" electronic ignition system. This increased the power to 365 hp (268 kW) at 8400 rpm. However, this put the Abarth below most of its competitors in terms of engine power. Two body variants were planned, the SE 020 with a flat windscreen and the SE 022. Participation in the brand world championship, originally planned with the SE 020, was cancelled while Ortner contested the European Hillclimb championship with the SE 022. He won the races in Dobratsch, Rossfeld and Cesana-Sestriere; he was second at Mont Ventoux and Trento Bondone and third at Ollon-Villars. With these successes, he became European mountain champion for the second time. After Carlo Abarth sold production facilities and name to Fiat at the end of the season, the Abarth 3000 Sp was no longer developed. Private drivers drove it occasionally in both mountain and circuit races. 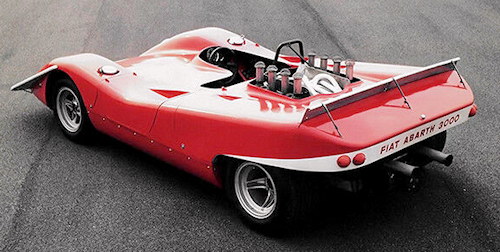