The Abarth 595 Competizione is a sports car based on the Fiat 500 and built and marketed under the Abarth brand . This is offered since August 2012.

Abarth 595 Competizione (160 hp):In August 2012 Abarth then brought together with the model 595 Tourismo also with 160 hp the 595 Competizione on the market. This was equipped with the 1.4-liter inline four-cylinder turbo gasoline engine, here with 118 kW (160 hp). The maximum torque of the engine was 230 Nm and was coupled with a manual five-speed gearbox. Among other things, 17-inch wheels, adaptive suspension, high-performance brakes and bi-xenon lights were standard. There was also the convertible 595C available. The semi-automatic transmission could be ordered for an additional charge of The standard consumption was given as 6.5 liters per 100 kilometers. 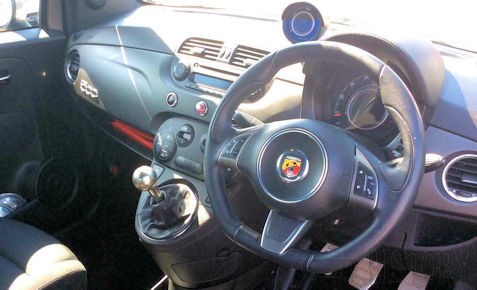 Abarth 595 Competizione Series 3 (180 hp): In the period from June 2015 to April 2016, the Abarth 595 Competizione was offered with the familiar from the Abarth 695 Tributo Ferrari engine with Garret 1446 turbocharged and 132 kW (179 hp). From the Tributo Ferrari came also the 17-inch wheels and the Brembo -Bremsanlage. The torque was 250 Nm at 3000 min , top speed 225 km / h and acceleration from 0 to 100 km / h was 6.7 s. Standard features included the Koni FSD suspension , sports seats by Sabelt and a flap exhaust system Record Monza, the bi-xenon light cost now extra charge. Convertible and semi-automatic transmission were still available on request. The standard consumption was given as 6.0 liters per 100 kilometers.

Abarth 595 Competizione Series 4: In July 2016, the Series 4 with modified front, rear and wheel design, new fabrics in the interior and 5-inch (surcharge 7-inch) multimedia unit has come on the market. 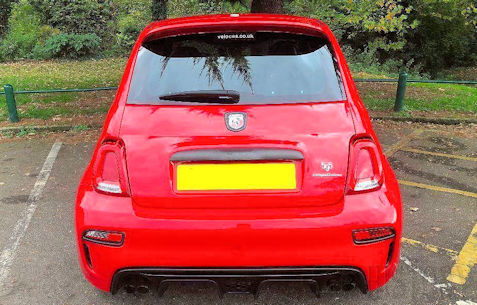