The Fiat Abarth OTR 1000 , alternatively also as Fiat Abarth 1000 O.T.R is a sporty small car model of the Italian car manufacturer Abarth ; with its special " radial " engine it was built between 1964 and 1969 in various versions in very small numbers based on the Fiat 850 .

A comprehensively upgraded Fiat Abarth OT Berlina Corsa (presumably an OT 1600 replica) with front-mounted radiator and chrome grille, as they were also typical for the OTR 1000 The technical basis of the chassis over the body to the engine comes from the Fiat 850 with rear engine and rear-wheel drive .

The OTR 1000 was developed in several versions, partly for company purposes, in one version also for customers; the number one most important and best-known version is the OTR 1000 coupe and was street legal from the years 1965 to 1969. Special feature is the Abarth engine Sigla 200 with a special cross-flow cylinder head , continue to OHV valve control and the new, proprietary radial principle, the Abarth in this Model used for the first time. The "R" in the model designation "OTR" explicitly refers to this particular cylinder head , So does not stand for "Race" / "Racing". A striking feature is the outward moved forward water cooler with chrome grille .

The original idea was the use in a close-to-production touring car category of 1965 restructured sports car world championship . However, the motorsport homologation delayed for further development work initially by a year; then the Commission Sportive Internationale (CSI), the approval authority of the Fédération Internationale de l 'Automobile (FIA), classified the model because of the elaborate RadialeCylinder head until 1969 in a standard remote and thus unattractive category. Abarth favored then the OTS 1000 coupe with a complicated series modified cylinder head of the Fiat 850 , and later for the group 5 the Fiat Abarth 1000 TCR with the radial cylinder heads and the lighter, more compact base of the Fiat 600 D . In the production version with road legal approval of the OTR 1000 makes 74 hp (54 kW ), in the racing version without street legal approval up to 106 hp (78 kW). Exact production figures are not known; individual sources assume that only five copies of the only production version in five years may have been completed at the factory, of which only eight are for the US market.

Traditionally, Abarth had close contacts with Fiat ; Thus early series vehicles of the Fiat 850 Berlina introduced in March 1964 and the Coupé and Spider models presented at the Geneva Motor Show in the spring of the following year were available to develop the versatile Fiat Abarth OT model series . The OTR 1000 saw Abarth as sporty top model of the 1-liter class with the aim to use the Corsa racing version in close-to-production touring car racing. The variants with street legality, however, should allow homologation and the Abarth-Image further promote. In the course of 1964 Abarthdeveloped under the direction of the chief engineer Mario Colucci and the head of engine development, Luciano Fochi , the engine Abarth Sigla 200 as a road version and Sigla 200A as a racing version . Both engine variants fit into the engine compartment of the sedan as well as the Coupé and Spider versions with regard to the carburettor assembly , the exhaust manifold and the entire exhaust system .

The public debut had the OTR 1000 in the production version as a coupe with street legal approval on September 9, 1965 together with the OT 1000 Coupe and the OT 1000 Spider at the International Motor Show in Frankfurt am Main .  On November 3, 1965, Abarth the OTR 1000 Coupé at the Turin Motor Show , while at the level of Bertone the Abarth OTR 1000 Berlinetta with Spider debuted basis; The latter, however, remained a prototype. Parallel to the OTR 1000 Abarth pursued further sporting concepts based on the Fiat 850 , so from 1964 the engine Sigla 202 / A for the planned OT 1000 SS Coupe and first versions of the Sigla 202 / D for the later OTS 1000 Coupe , both with heavily machined Cylinder heads from Fiat . The radial cylinder head Abarth developed continuously until 1971, most recently for racing versions of the Autobianchi A112 and Fiat 127 . A first modification of the OTR 1000 was the smaller displacement OTR 850, The Abarth only in 1966 and only by saloon body offered; another, very successful in motorsport development of the OTR 1000  used from 1967 Fiat Abarth 1000 TCR Berlina Gruppo 5 (motor Sigla 210G ) based on the lighter Fiat 600 D .

Controversial is whether the OTR 1000 Coupé - as well as the parallel models with coupe body - received a facelift in early 1968, which traced the transition from Fiat 850 Coupe to 850 Sport Coupe . Recognizable these vehicles from the years 1968 and '69 on the round, integrated in the front auxiliary lights, a modified grille, a more distinctive rear end with thin chrome frame and two taillights right and left and bumper horns front and rear. This is supported by the fact that the model was officially offered until 1969. The individual vehicles known today as well as photos of former test cars, however, invariably show vehicles from the first Fiat 850 Coupé series.The production of the OTR 1000 ended at the latest 1969 together with the OTS 1000 Coupé , which had extended the model pallet since 1966. From the Fiat Abarth OT series then remained for another year, only the OT 1000 Coupe (now with the stronger engine of the previous OTS 1000 Coupe ) and the Fiat Abarth OT 1300 Coupe ; The latter had also expanded the model range from 1966.

Available was the OTR 1000 Coupe with red paint ("rosso") and black interior and two successive old white / cream white tones ("camoscio") with red-black interior. How many OTR 1000 coupes were made at Abarth is controversial. Thus, the FIA homologation number 230 shows that on April 30, 1966, the minimum number of fifty identical vehicles was reached.

The OTR 1000 is the only vehicle model that the Abarth -Motor Sigla 200 uses a water-cooled 1.0-liter gasoline engine with four cylinders in series . A special feature is the advanced, developed by Abarth and self-made "radial" cylinder head, which had its premiere in this model and was subsequently used in various other. In accordance with the motor racing regulations for touring cars, he took over in principle the OHV valve control of the original model, but differs from the Fiat cylinder head in the following points:

A cylinder bore of 65.0 millimeters and a piston stroke of 74.0 millimeters results in a displacement of 982 cubic centimeters. The output of the production model numbered the manufacturer with 74 DIN PS at 6500 revolutions per minute. The mixture preparation is provided by two Solex - twin carburettor type C32PHH . The top speed was Abarth with "over 170 kilometers per hour", the consumption of 9 liters to one hundred kilometers.  The work data sheet and the FIA homologation call from the factory, however, a five-speed gearbox from Abarth.

The OTR 1000 uses the suspension of the Fiat 850 with independent suspension . Because of the higher performance it is modified as with all versions of the passenger car series Fiat Abarth OT . Ex factory had the OTR 1000  - similar to the other coupes of the OT series - 13-  inch high Abarth - steel wheels with a chrome-plated decorative cover with Abarth logo to cover the hub and wheel bolts. For an extra charge, 13-inch alloy wheels from several manufacturers were available from the factory . The standard tires had the format 145 × 13 (Michelin and Pirelli ) and 155 × 13 ( Kléber Colombes ).

The front wheels are - as with all OT 1000 versions - disc brakes . As standard, the OTR 1000 should have been fitted with disc brakes on the rear wheels - to the extent that this differs from the weaker models , however, have sometimes preserved vehicles only rear drum brakes.

The OTR 1000 uses the standard bodies of the Fiat 850 . Outwardly it differs from this in many smaller details; compared to other variants of the passenger car series Fiat Abarth OT , the external differences are sometimes low.On the rear panel is located between the space for the rear license plate and the right taillight unit below the chrome lettering "Fiat Abarth" and "1000" the addition "OTR"; replaces the chrome-plated "OT" logo in front of the lettering "Fiat Abarth".

Further outward features are shared by the OTR 1000 Coupé with the OTS 1000 Coupé produced from 1966 to 1969 : At the front of the car, a slightly trapezoidal grille, narrower at the bottom, clad the special opening, which supplies the forwardly positioned radiator with cooling air. Above the grill is a narrow chrome strip with the inscription "Fiat Abarth 1000". In the coupe, the large Abarth logo is mounted centrally on the radiator grille, in the few OTRL seen from the front asymmetrical top left. On the front panel of the road-legal versions, two chrome-plated attachment points for the concealed oil cooler mounted behind the plate can be seen below the bumper; only the racing variants have a separate opening for this radiator. Other exterior features that distinguish the Fiat Abarth OTR 1000 from the Fiat 850 can also be found on other models of the OT series, such as the "Abarth" logos on the body sides and the wheel covers.

From the Fiat Abarth OTR 1000 emerged from the factory following variants: 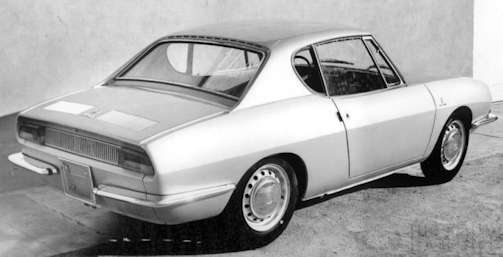