The Abarth Simca 1300 was the first product of Carlo Abarth's collaboration with Simca . As early as 1961, rumors appeared for the first time, Abarth working together with the automobile plant of Henri Théodore Pigozzi . The connection between the two companies was brokered by Vienna- born Austrian engineer Rudolf Hruska . Hruska had worked with Carlo Abarth at Cisitalia in 1949 and was a technical consultant at Simca in the early 1960s, while Pigozzi was looking for a sports partner for his small cars to test developments for mass production on the racetrack Abarth for the Simca 1000,

This vehicle, which was presented in 1961, was a sales success in France and Italy in 1962. Pigozzi also hoped to be able to establish the Simca brand in motorsport by working with Abarth.

Thus, the Abarth-Simca 1300 was based on the floor plate of the Simca 1000. The bottom plate, the gearbox, the axles and the steering were adopted. The body was a redesign, followed in shape and lines the coupes such as the Fiat Abarth 850 and the Fiat Abarth 1000 , and was adapted to the bottom plate of the Simca. The advanced design came from Abarth chief engineer Mario Colucci . As a coachbuilder formally appeared the "Carrozzeria Abarth" in appearance, actually awarded Carlo Abarth and Colucci this work to small, local companies: from 1963 completely to the Carrozzeria Sibona - Basano , before Beccaris , both from Turin.

Completely redesigned was also the engine. The 1.3-liter DOHC rear engine made up to 101 kW (138 hp) and had two Weber -45DCOE double carburetor  . The car also had a dry sump lubrication with two oil pumps, and front mounted radiator. The GT road version reached a top speed of 230 km / h. 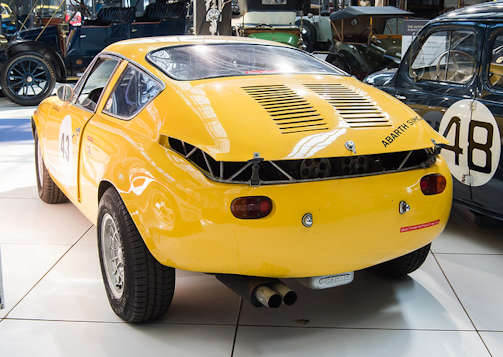 The Bialbero racing version was 20 km / h faster, but was rarely used. Gianni Balzarini won the mountain race on Mont de la Lure in France in 1962 and Lucien Bianchi won the same year at the Trophpée d'Auvergne , a circuit race in Clermont-Ferrand in his racing class. Another victory was celebrated by Jean Guichet at the Coppa d'Autunno in Monza , where he won the GT class. At the 24 Hours of Le Mans in 1962 , Balzarini shared a 1300 with the Austrian Franz Albert, The race ended after 30 laps due to gearbox damage. Just nine laps before, the second factory 1300 Bialbero, which former French ski star Henri Oreiller shared with Tommy Spychiger , failed with the same defect.Hans Herrmann , who came to Abarth in 1963 and was able to win the class at the Daytona 3-Hour Race and the Sebring 12-Hour Race in the spring of the year, among others , also celebrated successes with the car . In Sebring he shared the cockpit with Spychiger and the Belgian André Pilette .